The term “plastics” largely consists of synthetic materials made from polymers, with a small amount of natural materials included. Within the retail industry, plastics are used for textiles, packaging, labels and much more.

Polyester, Nylon, Rayon and Organza are amongst the most popular plastics found in textile manufacturing, with each being used according to their own unique benefits. Polyester is the most common synthetic fibre, with 76% production share in 2014. It was first used in garment manufacturing in the 1970s due to its characteristics that make it desirable for outdoor clothing. In total, synthetic fibres account for 75% of the world’s total textile production, with 69.4 million tonnes being produced in 2016.

WHAT IS THE WAR ON PLASTIC?

In 2018, UK Prime Minister Theresa May announced plans to eradicate plastic waste over the next 25 years.

Make ours the first generation to leave the natural environment in a better state than we found it.

THE IMPACT OF UNSUSTAINABLE PLASTIC SOURCING

Since the 1950s, 8.3 billion metric tonnes of plastic has been produced, with 79% of that being thrown away. 9% is recycled, whilst the rest is incinerated. The amount of single-use plastic waste in the UK every year would fill the Royal Albert Hall 1,000 times.

Plastic can be toxic and result in the disruption of hormones essential for a healthy existence. Additionally, it can attract other poisons and pollutants that exist in the natural world. The greatest danger caused by plastic production and disposal of plastic is to the oceans. There are already 500 times more pieces of microplastics in the sea than there are stars in our galaxy, and recent studies suggest that there could be more plastic than fish in the oceans by 2050.

To sea life, plastic can resemble their natural food: to sea turtles, plastic bags can appear similar to a jellyfish, and to baby perch plastic may appear more appetising than plankton. The effects of consuming these plastic items can be fatal, with more than 600 marine species being considered part of the sixth mass extinction of life on Earth. It is also believed that plastics could be re-entering the food chain via seafood.

In early 2018, a 5p plastic bag charge was extended to include the previously exempt, small shops, at an increased tax of 10p per plastic bag. Critics of the environmental plan felt that the move should be underpinned by legislation holding both the government and businesses to account.

We will incorporate all existing EU environmental regulations into domestic legalisation when we leave [the EU]. We will set out our plans for a new, world-leading independent statutory body to hold government to account and give the environment a voice.

It is not uncommon for businesses to feature sustainable plastic in their products; however, this is often limited to a small range. In 2015, global sports fashion brand Nike used shredded, recycled plastic bottles to make socks, shorts and shirts for the United States’ Women’s World Cup team; in comparison, approximately two billion plastic bottles have been diverted to landfill by the company since 2010.

In January 2018, following the UK’s declaration to eradicate plastic, British supermarket Iceland announced plans to make their own label packaging plastic free by 2023. More than 1,000 products will be affected by the change, with new ranges being packaged in paper, pulp trays and paper bags. Should the plan be carried out effectively, Iceland’s UK packaging will become 100% recyclable through domestic waste collection.

The onus is on retailers, as leading contributors to plastic packaging pollution and waste, to take a stand and deliver meaningful change. Other supermarkets, and the retail industry as a whole, should follow suit and offer similar commitments during 2018. This is a time for collaboration.

UK supermarkets alone generate approximately 800,000 tonnes of plastic packaging annually. 80% of consumers were found to say that they would endorse a supermarket’s move to plastic-free packaging in a 2017 OnePoll survey of consumer attitudes.

Removing plastic from supply chains is an increasingly popular option in the War on Plastic. UK supermarket Morrisons have announced plans to remove plastic wrapping from their cucumbers – a step that has received criticism. According to the Cucumber Growers’ Association, plastic wrapping prevents dehydration and is more hygienic.

The total removal of plastic from the retail industry may not currently be possible. Although a focus on reducing our dependency on plastics is beneficial to the environment, there are also other ways to increase the sustainability of the plastic currently being sourced.

Whilst recycling prevents plastics that are already in the fashion cycle from entering landfill sites, there is no known method for dealing with the chemical by-products of the original manufacturing. Additionally, once the initial recycling has taken place, there are limited options for further recycling.

Re-using materials such as plastic bottles is a form of mechanical recycling…It takes materials and melts them down to re-extrude the polyester they are made from. This is then turned into a new yarn and then spun into a fabric. 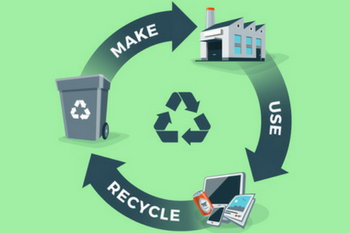 One commonly accepted method of achieving more sustainable sourcing within the fashion industry is the creation of a circular economy. In comparison to the linear economy, which consists of garments being made, used and thrown away, garments within the circular economy are reused, recycled or repurposed accordingly. For plastics, the manufactured fibres already in existence can be absorbed by the circular economy, reducing waste and driving greater resource productivity.

For those fibres that cannot be reused or repurposed, it is essential to find the most sustainable way of recycling. Worn Again, a UK based company has developed a method for separating and recapturing polyester and cotton from both textiles and plastic bottles. Through the process, dyes, contaminants and other polymers can be removed, leaving virgin equivalent resources. Currently, 75% of all non-re-wearable textiles can be used.

Knowledge is key. It is only possible to establish the sustainability of a product if the provenance is traced. A Behind the Barcode report published in 2015 found that of 219 brands surveyed:

Supply chain transparency provides the visibility required by businesses to not only identify, but to also act on the sustainability of products within their supply chain.