Easter: The Sourcing Problems in the Cocoa Industry 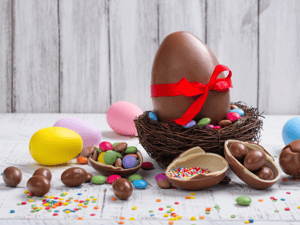 With Easter less than a week away, the buying, the giving and let’s be honest the eating, of Easter eggs is well underway. There really is no shortage when it comes to variety: from the standard chocolate options; dark, white and milk, to the extravagant: marmite flavoured, Game of Thrones themed and even an egg made entirely from cheese.

Each year, approximately 80 million chocolate Easter eggs are sold in the UK, equating to around £200 million. With all the extra chocolate at this time of year, and our increasing knowledge of the damage increased production can cause, the question arises: How is this managed and what is the impact?

As with most products, the production of chocolate can vary between businesses and suppliers, but there are some common steps: harvesting, fermenting, drying, roasting, cracking and winnowing, grinding and conching, tempering, moulding and wrapping. Once created, moulded and packaged the eggs are then transported to the shelves, ready for us to purchase.

The journey of the cocoa bean starts in the field – and often, so do the impacts and issues surrounding sustainability of cocoa sourcing.

Since 1960, global cocoa production has increased fourfold, greatly increasing the demand for land to grow cacao (the raw beans that produce cocoa). Forests in West Africa have reduced in size by 18% due to deforestation for cocoa production. 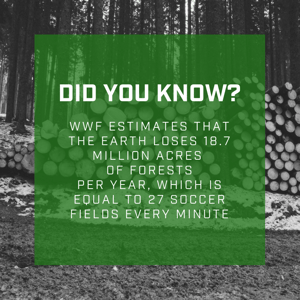 These forests provide homes for wildlife, the increase in deforestation is leading the destruction of their natural habitats meaning that 80% of Earth’s land animals are now at risk of extinction.

A study of primates in 23 protected areas of the Ivory Coast found that illegal cacao farms covered two thirds of the land studied, resulting in a dramatic drop in primate populations such as chimpanzees. In 13 of the protected areas, the researchers were unable to find a single primate.

There are parks in Ivory Coast with no forests and no primates, but a sea of cocoa plants,

The removal of forests for the production of cocoa and other crops, has a negative effect on global warming. Fewer forests means larger amounts of greenhouse gasses entering the atmosphere. It is estimated that 15 percent of all greenhouse gas emissions come from deforestation.

Studies show that there is not enough space left on Earth to plant enough trees to prevent global warming. Whilst it has been suggested that more trees could be planted, as they used carbon dioxide and release oxygen, it is not possible for enough trees to be planted to cover the goals laid out by the Paris Agreement; a legally binding deal between 195 countries to tackle climate change. 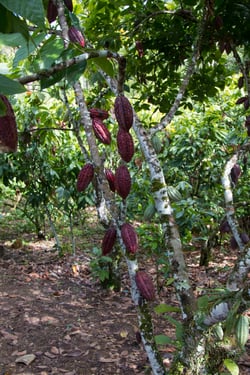 Child labour has long been associated with the cocoa industry. The Cocoa Barometer 2018 (an overview of the current sustainability developments in the cocoa sector) estimates that 2.1 million children are working in cocoa fields in the Ivory Coast and Ghana alone – an increase on previous numbers. The total number of cocoa farmers is estimated to be as high as 2 million in the Ivory Coast and Ghana alone.

In collaboration, Nestle and The International Cocoa Initiative (ICI) have piloted Child Labour Monitoring and Remediation Systems (CLMRS), with similar projects being implemented by other businesses. So far, the CLMRS have resulted in a reduction in child labour of approximately 50% in a sample group of 1,000 children.

In recent years, businesses have increased their efforts to address the issues in cocoa supply chains. In Spring 2019, UK supermarket Tesco announced ahead of the holiday that 100% of the cocoa used in their own-brand chocolate products – including Easter eggs, cakes, biscuits and desserts - is now Rainforest Alliance certified. This ensures that soil quality is preserved, a fair wage is received by farmers and wildlife is protected. Partnerships like this, with the Rainforest Alliance have resulted in the prevention of the deforestation of nearly 4.4 million hectares in high-risk areas. To put that into perspective, that’s equal to around 4.4 million rugby pitches.

Undoubtedly, there is greater demand on businesses to guarantee ethical and sustainable supply chains than ever before. The Modern Slavery Act, in the UK, for example, makes businesses with a turnover beyond £36 million responsible for the working conditions within their supply chain. This is replicated through similar legislation around the world. However, can you ensure sustainability if you don’t confirm who is supplying you?

The vastness and complexity of today’s supply chains means that current methods of tracking and tracing – spreadsheets, emails and trust – can no longer be relied upon to provide accurate, up-to-date data. New technologies and digital resources are required if we are ever to truly tackle the sustainable sourcing problems in the cocoa industry.