In today’s world, we are more informed than ever before, with consumers becoming increasingly aware of the consequences that their habits are having on the planet and communities.

WHAT IS ANIMAL AGRICULTURE?

Animal Agriculture is the practice of breeding animals for the production of animal products and for recreational purposes.

The main purpose of animal agriculture is to produce food for human consumption, although humans also rely on animals for labour and clothing too. The animal agricultural industry has changed rapidly over the years to meet consumer demand and expectations.

For thousands of years humans have eaten meat, milk and eggs, all produced from animals as a source of protein. The Agricultural and Horticultural Development Board (AHDB) estimates that the average UK meat consumption was around 79 kg per person in 2016, that is the equivalent to 527 Guadeloupean Bananas! The way in which animals are bred determines the end product - cattle are very rarely raised on all grass provisions; they are fed a carefully formulated diet to maximise meat and milk production.

Advances in genetics and nutritional studies have greatly increased both the average size of farm animals as well as their productivity. For example, chickens today weigh up to four times heavier than they did in 1957 – meaning farmers make greater profit from the flock.  In addition to this, artificial growth hormones are used by beef cattle producers in Canada and the US to increase the daily rate of gain and lean meat yield; however, it is important to note that these hormones (such as testosterone and progesterone) have been banned in the EU due to the uncertainty around the potential health risks to humans.

Within the garment industry there are materials such as fur, wool, silk and leather that have come from animals. A 2013 University of Florida study concluded that humans wearing clothing dates back 170,000 years – with climate factors around that time it is assumed that animal skin or fur was worn by humans for warmth. Now, fast forward to the 21st Century, ruminant fibres such as hair and wool are still being used in the manufacture of clothing, bedding, housing and carpets. 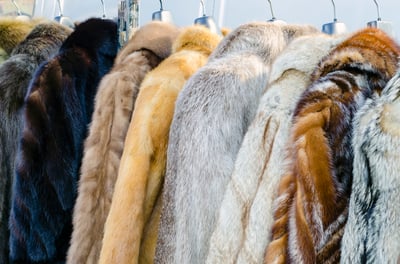 110,000 campaigners are campaigning for the UK parliament to ban the sale of animal fur all together; this is because although fur farming is prohibited in the UK, it still allows fur imports. Recently, brands and retailers have banned the use of real fur due to pressures from conscious consumers.

Others argue against the ban on fur saying that there are still no viable alternatives that provide the same level of warmth, are as biodegradable and as sustainable as genuine leather or fur.

Although campaigners are pushing for the ban on fur, other by products such as Kangaroo leather are still being used by brands in their products - millions of Kangaroos are slaughtered every year, and their skins are often used for football boots.

Although it has been said that only 1% of the UK population is Vegan and 2 to 3% of the UK’s population is Vegetarian, there has been evidence of a decline in meat consumption. The Department for Environment, Food and Rural Affairs National Food Survey found that in the last year, the amount of raw beef, lamb and pork bought by households has fallen by 4.2% in the UK, and products such as sausages, bacon, poultry and meat based ready meals has fallen by almost 7% since 2012. Animal rights activists argue that it is wrong in principle to raise and kill animals; but also, that it’s wrong even where the processes involved are ‘humane’.

These welcome new statistics show that consumers are increasingly responding to the meat industry’s terrible animal protection, environmental and health credentials by cutting down on and cutting out animal products.

It seems that there could be a shift in beliefs with the majority of people feeling that animals should have rights equal to that of humans. Although many people still do not believe that animals have the same rights, they agree and do feel that animals have important interests that should not be violated.

WHAT EFFECT IS ANIMAL AGRICULTURE HAVING ON THE ENVIRONMENT?

Recent claims suggest that the fashion industry is one of the top five most-polluting industries in the world alongside oil. 3 of the 5 worst materials for the environment, per kilogram, are derived from animals; the chemicals used to treat the materials, the tanning and dyeing processes are significantly impacting the environment.

Globally, we’re producing over 100 billion new garments from new fibres every single year, and the planet cannot sustain that.

According to the Department of Environment, the tanneries in Hazaribagh, Bangladesh, alone discharge 22,000 m3 of untreated liquid toxic waste daily into the rivers, gutters and canals that run alongside the roads. The use of excessive amounts of sulphide and chromium in tanning processes give rise to high concentrations in the effluents. Sulphide, chromium and phenols are among the most hazardous among pollutants from the tanneries. Chlorinated phenols are reported to be carcinogenic and harmful to aquatic life and animals that drink the water.

Another major global effect that animal agriculture has, is climate change. Here is why:

In addition to this, according to a scientific report, every pound of methane is more than 84 times as effective as carbon dioxide is at trapping heat in our atmosphere.

It is important for businesses to know where the meat or the by-products that they are selling have come from, as well as whether or not it is 100% safe for human use or consumption. If a brand or retailer is found to be selling products that have been sourced unethically, from an animal that has endured cruel suffering, it is the brand itself that is going to be held accountable, which is why supply chain transparency is vital for businesses to mitigate the risk of poor consumer perception and brand image.

In 2017, major UK retailers such as Boohoo and Groupon were exposed for selling real animal fur but advertising it as fake. Boohoo said, “We are very disappointed that on this occasion our high standards have been breached by the suppliers from whom these items have been sourced.”, Groupon also insists it is reviewing its “suppliers and internal processes to ensure this does not happen again”. Both of these incidents highlight how important supply chain visibility is in order to prevent unethical supplier behaviour and the potential consequences such as bad PR, loss of customer loyalty, and even boycotting.

Lack of visibility over the supply chain could also result in brands having no knowledge of where products are sourced from and being unable to mitigate risks effectively. This leads to lack of control over whether meat is safe for human consumption, whether leather is being sourced from an ethical farm, or whether they should be sourcing from somewhere else.

Whilst the world may never be free of animal agriculture, brands and retailers do need to change how they source their products. Within the fashion industry, knowing who your suppliers are, is the first step to achieving a sustainable and ethical supply chain. With this level of transparency, a brand is able to make more informed sourcing decisions and also have the confirmation that your audited factories are the ones producing your products, which in turn provides the reassurance that no unauthorised subcontracting is occurring.

A great way to identify whether a product is ethically sourced is by checking whether or not it has been certified by a relevant organisational body, the best way is to ensure nominated supplier routes are being adhered to.

With both businesses and consumers making more informed choices, together we can make a difference.