Deforestation has always occurred due to natural causes such as over grazing or wildfires, however man-made deforestation has increased the rate we are losing our forests. Man-made deforestation means the mass removal of a forest or group of trees where the land is converted for non-forest use. Examples of this type of deforestation would be to clear forest areas for housing, factories and farming. National Geographic estimate that if deforestation continues at the current rate, we will have no rainforests left in 100 years.

WHY DOES HUMANITY DESTROY FORESTS?

There are many reasons why humans' clear forests in today’s modern world, with the main ones being:

To eliminate deforestation altogether would be impossible as homes, farming and products, such as those listed above, will always be needed. However, we do need to reduce the rate at which it’s happening by embracing responsible forest management and sustainable sourcing.

THE IMPACTS OF DEFORESTATION ON THE WORLD

Forests are not just a cluster of trees for recreational use, they provide homes to 300 million humans and many different species of animal. Eighty percent of Earth’s land animals and plants live in forests with many facing extinction due to the destruction of their natural habitats.

Sumatran tigers are under huge threat, the WWF believe that there are less than 400 left today, and that one of the major reasons for this is the acceleration of deforestation, destroying their homes. There are fewer than 80,000 Orangutang's today, putting them on the critically endangered list, alongside the Sumatran Elephant of which WWF estimate that less than 3000 remain. 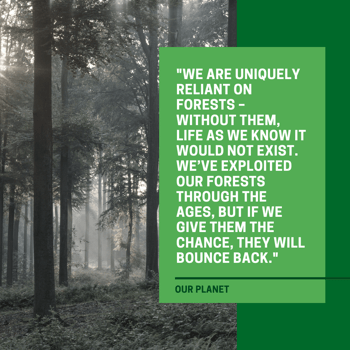 Many native tribes live in the rainforests of the world, and deforestation is directly resulting in the destruction of these people’s homes. Their quality of life is also affected by soil erosion which causes silt to leak into their water sources resulting in poor health. Trees roots anchor soil so if the trees are cut down the top soil can be washed away. This top food layer of soil is the most fertile, so it makes it difficult to grow crops, and the muddy water also kills fish limiting their food supply even further. The land that is left is more susceptible to flooding and landslides putting any remaining villages at risk.

According to the World Wildlife Fund (WWF), the Earth loses 18.7 million acres of forests per year, which is equal to 27 football pitches being torn down, every minute.

IMPACTS OF DEFORESTATION ON RETAILERS AND BRANDS

As consumers are becoming increasingly aware of the impacts of our forests being destroyed, they are making more informed choices, and thus driving change in retailers and brands.

In reaction to consumer pressure, retailers are looking to work with suppliers who have certification such as Zero Waste to Landfill, FSC approved and conformity to the Modern Slavery Act. Failure to act could have a negative impact on a retailers or brands reputation, brand image, brand loyalty and ultimately their bottom line, if consumers stop buying from them.

In an historic ruling, Columbia’s rainforest now has the same legal rights as a human, to help protect it from deforestation and protect it for future generations. Columbia’s high court ordered the government to protect the Amazon. Whilst the ruling is superb news we all need to do more to solve the problem.

Collaboration is key. Governments, retailers, brands and consumers need to work together to solve the issue.

WWF formed an organisation Global Forest & Trade Network (GFTN) in 1991. GFTN works with companies and communities over 18 countries to ensure that millions of hectares of forests are independently and credibly certified. They guarantee that the forests are well managed and that their products come from legal and sustainable timber harvests.

The Forest Stewardship Council (FSC) is an international, non-governmental organisation dedicated to promoting responsible management of the world’s forests. Forests are inspected and certified against strict standards. In addition to forest certification, the FSC system includes a certified chain of custody that tracks the timber through the supply chain from the forest to the final user.

To ensure sustainability, forests need to be carefully managed by replacing what we take, replanting young trees to replace older trees fallen. The number of new tree plantations is growing each year, but we also need to slow down the rate of deforestation by using less.

Little acts by consumers all help - recycle, reduce waste, re-use, rethink where you buy from!  As consumers, we can do our bit by making sure we buy forest-friendly products. Look out for the FSC logo on your products.

Retailers and brands need clarity and transparency in their supply chain to ensure they partner with suppliers that source ethically. Ensuring transparency within supply chains, confirming that those nominated routes are being adhered to, and being able to see a supplier’s certification is still in place and up to date, is vital in order to drive change.